The story of the Black Diamond canal boat

The legend of the sinking of the Black Diamond Canal boat in Buckeye Lake in 1850 is a well- documented one. The book entitled, The Story of Buckeye Lake by Joseph Simpson has the complete story of the ill-fated trip to Thornport.

Mr. Simpson owned a grist mill and needed coal to power his mill. At that time coal was so valuable that it was called black diamonds so that is what Captain Wade named his boat.

The trip down the canal was a perilous one as Captain Ward and his two-man crew along with cook made their way up the uneven shoreline for a mile or so when the navigators arrived at their destiny, the fatal curve. Instead of hugging the shoreline the helmsman, full of ignorance of the dangers besetting these waters permitted his craft to “sheer” where she landed firmly upon a well-preserved stump lurking just beneath the water’s surface, outside the channel. She hit with such impact that a large hole was ripped in her bottom, and she began to fill with water. The tow-line was quickly applied to her stern and the team of sad horses pulled the boat around up against the rocky bank where “all hands” safety got ashore as she went down and The Black Diamond was no more.

Local residents and natives knew of this legend and in 1962 when the steel wall was placed on the shoreline to support the dam, pieces of the wreckage of The Black Diamond were brought up by two local boys along with large chunks of coal.

The Queen of the Lake II tour boat would tour by this area, now known as Black Diamond Bend, would tell of the story to listening tourists as they passed the historic spot many times.

Then the big news that our earthen dam was in peril and had to be fixed and in March of 2014 the lake was drained to 3 feet so that reconstruction could begin.

The large earth-moving equipment began a path down the old steel wall clearing all kinds of items from the bottom of the lake as to place a 30ft. stone berm. This machine was going right down the path of the lake and members of the Buckeye Lake Museum thought maybe we could find the rest of The Black Diamond. After all the construction crew, had been digging up all kinds of things some were historic but many were not.

The Museum volunteers and Director keep up the vigil of working with the construction crew telling them that there was the possibility of ancient remains of the old boat lurking below the waters. Day after day someone would check in with the crew and watch their progress as they came closer and closer the bend. The crew might have thought the Museum folks were a bit “crazy” but they worked with them.  In February of 2016, the crew called the director of the Museum and said, “I think we found your boat!!”

It was true. We had found The Black Diamond wreckage. Large pieces were pulled from the soggy bottom of Buckeye Lake along with over 400 pieces of wood from very tiny to large pieces including the stern of the canal boat. It was the biggest historic find of this type of vessel in all of Ohio including the shores of Lake Eire. 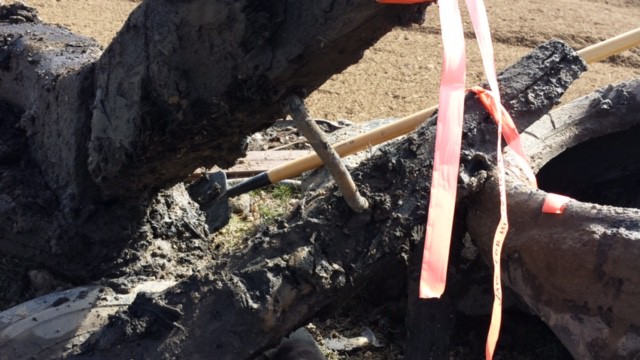 She is now in restoration with assistance from The Ohio History Connection and Lawhon & Associates. There is a 4ft. model being made that will be housed at the Buckeye Lake Museum. Several large pieces are in restoration and will end up where they were found at Buckeye Lake in the archives of history at the Museum. She has a final home, and we are happy we stuck with it.

Three words: The test of liberty or tyranny

What are American values?