Started in 1855 and finished in 1856 by George W. Gregg, the Octagon House is a 164-year-old house that has seen a lot of change take place in Pickaway County – one change being that the house itself was moved to an entirely new location in an effort to save it from being destroyed when the Walmart Supercenter was being built.  During that time a group of concerned citizens organized from the Roundtown Conservancy to save and move the beautiful structure to its current home at 440 Crites Road.  Located on approximately 2 acres, members of the community and past and current members of the Conservancy have worked over the years on countless improvements to move toward the final goal of restoring the building to what it looked like in the mid to late 1850s.

Turn your frown upside down!

I recently spoke with Stephanie Sharpnack (president) and James Esteph (trustee) and they opened up about some things that have happened in the last 2-3 years to help with the preservation and restoration of the Octagon House.

“After a long process with easement rights we were able to get American Electric Power run electricity to the house in 2016,” says Esteph.  “Stephanie went back and forth with various companies to get permission.”  Once electricity was installed they had a few outlets installed to allow for basic functionality within the building.  Esteph added, “This not only made it easier to be able to work on the Octagon with power tools and light but the installation of electricity also allowed us to put an alarm system inside the Octagon in an effort to cut back on the amount of vandalism which was taking its toll on the Octagon.” 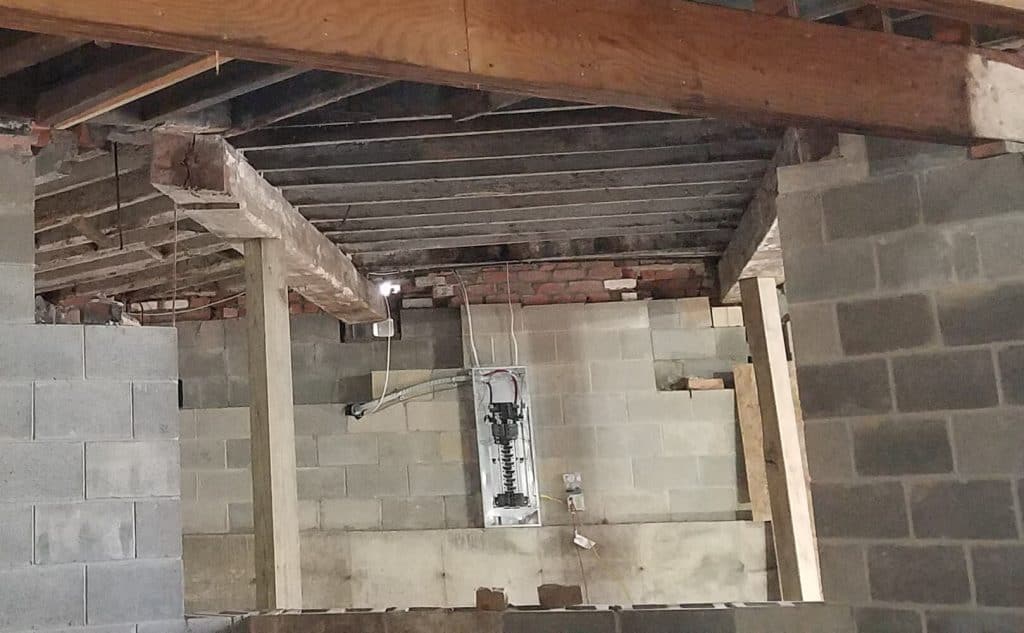 Since the move of the Octagon from the Walmart location it was noticed that the middle part of the house had started to settle and the floor needed to be slightly raised to help make it level.  “It [the floor] went up a couple inches because the top step to the staircase was angled downward. So then our contractor, Frank D’Aiello, did the beams downstairs, the floor was flat like it is supposed to be. The second floor next to the staircase had dropped about four inches. That was raised.” Stephanie explained.  Two large beams were placed in the center portion of the basement to accomplish this and in the near future more support will be added to the spiral stairs.

“One of the huge steps that was made in the past few years was the decision in 2017 to change to a new historical architect,” according to Esteph.  “While the previous architect was essential to help save the Octagon House there were several on the board of trustees who were worried about how slow the project was moving forward in recent years.”  Esteph said, “The inside of the building was starting to deteriorate with boards buckling from rain, snow and elements getting inside the Octagon.  After careful consideration and a vote by the board of trustees we decided to hire a new firm, Heritage Architectural Associates, to help move the Octagon House to the next level of restoration before it was lost.  While not quite everyone agreed with this change, the majority did agree with it, and we hired Heritage.  By Spring of 2018 the firm had already completed the ‘Architectural Description, Assessment and Recommendations’ which was part of what was needed for us to be able to receive a long awaited grant from the State of Ohio”.

Another more recent project that has been taken care of was the restoration to the cupola and placement of new coverings over some of the windows on the Octagon.  “We installed acrylic in all the second floor and the cupola windows and [used] some of the acrylic down here in the windows so there could be more light when we’re doing tours.”  Esteph added, “This also helped stop the rain that was coming in through the boards and covering that was torn on the upper floor.”  “The cupola was totally repaired and put back to the original state.” Stephanie responded later on.

Currently, they’re in the process of getting the stairs back up to par with what they were before.  “The staircase [is our current project]. Trying to get that and the second floor supported more. Everything that’s done like that, will affect the staircase in that area.” Stephanie shared.  While the stairs are still very beautiful they still have the scaffolding up along with a 4×4 brace.  Eventually an additional support will be added to the stairs.  Currently they do not use the spiral stairs and only access the upstairs area via the “back” stairs that were repaired back in 2013.

According to Esteph, “We are also currently working on the details of our mortgage from the National Trust. This is the final stage before we receive the grant from the State of Ohio.” Esteph adds, “Due to the amount of funds needed for the project, things often move slower than we want, but we continue to do what we can with what we have while we work to raise additional funds for the upkeep and restoration of this beautiful historical structure.”

Some repairs come up in the process of fixing or repairing other items.  While working on the staircase it was discovered that some of the ceiling had soot from a fire that happened at some point.  The Roundtown Conservancy is still trying to find out information about a fire that may have happened sometime about 60-70 years ago.  They were unable to find anything in the newspaper archives.

Below is a photo from 2016 where the windows now had the blue insulation covering over boards. You will notice that many of the blue insulation sheets were torn and ripped which allowed for the elements to get inside the Octagon.  “Some of the boards had either fallen off or were torn off during vandalism which caused more damage,” according to Esteph.  “The acrylic plastic was a huge plus in the preservation of the house while we moved forward on getting more funds to be able to actually replace the windows.”

The next photo was taken April 2019 after the acrylic or plastic was installed on the windows on the 2nd floor and the cupola was restored.

For more information or to make donations, you can reach out to the Roundtown Conservancy at:

Please Note:  James Esteph serves as a co-editor of the Dimple Times and serves a trustee on the Roundtown Conservancy board.

Half way point to Pumpkin Show 2019

Lauren has been writing since she was at least ten years old – and anywhere she traveled, you could always bet that she would have a journal and a pen in hand. Though she writes mostly for the Dimple Times now, she has dabbled in writing short stories and novels throughout her life.She's spent most of her life in Circleville, Ohio – which has been a huge inspiration behind a lot of the locations, situations and ideas she has come up with for her different stories over the years.Lauren enjoys using her writing to bring enlightening, encouraging and informative content to the Dimple Times – but outside of work, she also enjoys curling up with her cat to watch movies, read or simply to write for herself.

Turn your frown upside down!

Conquer one pedal stroke at a time

Half way point to Pumpkin Show 2019

If you need a co-signer, you’re not ready

In the Garden with Rick – Dogs and your garden