CIRCLEVILLE – On Monday, January 20th, Circleville Township signed a new lease agreement with Survival Flight based out of Batesville, Arkansa. This new arrangement will drastically decrease medical flight times for people in Pickaway, Ross, and Fairfield counties. Survival Flight provides emergency medical transportation in the form of helicopters with medical crews, and they often transport people from serious crashes to Columbus-based trauma centers. They also provide non-trauma related medical transportation. Circleville Township contracts with the Pickaway Township Fire Department for fire and EMS coverage, and the fire department has been a major player in securing the new service.

Medical flight crews will be located at the Circleville Township building and will be available 24/7 to take calls. Carol Gray, a flight nurse on that crew said, “We worked with your fire departments a lot this past trauma season. So we did a lot of calls out of here. I’ve been talking to Chief Brown at the Pickaway Township Fire Department. It would really benefit them to have an aircraft close by, of course along with the whole community. We’ve had a great partnership with all of your fire departments already, so I look forward to making them even better.”

Survival flight currently operates out of Marion and Grove City locations. The Grove City location will be moved to the township building, which is located just south of the Bell Station Road, North Court Street intersection. The great news for area residents is that the close location should cut down the time it takes to respond to a call. Amanda Wolfe, a flight nurse in the crew said, “We give ourselves 7 minutes to get to the helicopter. With how close the housing will be to the landing zone (LZ), we think we can do even better than that.”

The company decided to locate the service further south into Pickaway County because it gives them faster response times, it’s closer to where a lot of the calls are coming from, and it increases the range of their operation by putting some distance between the two current launchpads. Gray said, “It makes us much more comfortable to be serving this area.”

Wolfe added, “We do a lot of stuff in Ross county and Fairfield County too. So it puts us in a better situation. It’s easier to come from outside the city and bring people in than to start in the city and come back out and then back in. It just makes more sense.”

One of the obstacles was to get the permission of neighbors who could be impacted by the noise of the helicopter. Kathi Yates attended the meeting with her mother Phyllis Yates who lives next door. Kathi said, “We had to call the squad several times last year, and they were coming from Tarlton Road which took forever, even though the fire dept was just down the road. It gives us peace of mind now to have emergency services in the North end of Circleville instead of the other side of town. We are thrilled to have them here.” Phyllis said she talked to other neighbors, and they’re all happy to have emergency medical services so close.

Brenda Palm, the Circleville Township Fiscal Officer said, “They’re tenants. We have an agreed upon rent. We’re looking to expand our building and the pad to accommodate them. It’s about enabling a service that’s needed around here.” Ernie Enoch, the township chairman said the agreement should almost break even by the end of the three year contract. He added that the township can always use another building if they pull out after that, but he hopes that they stay for much longer.

Steven Perry, Director of Corporate Compliance for Survival Flight said, “Over the last year the flight volumes and call requests that have come in show this was a hotbed of activity.” He added, “It’s not just traumatic flights, its medical cases and a lot of transfers. One of the things that we were looking at is we wanted to put some separation between the two bases. We already had one in North Columbus and South Columbus, but they were still kind of right up against each other. So we wanted to open it up; that way we could cover more area.”

Besides providing life-saving services, the medical crew wanted it to be known that they intend to help the community in other ways as well. Wolfe said, “One of the things I have talked about with Chief Brown is finding volunteer firefighters and volunteer EMS people these days is problematic. So we’ve offered to go into the schools and try to help get the kids excited about EMS and fire protection. So we plan to be very active in the community.”

Local law enforcement including k-9 units will also benefit from the new location. Wolfe said, “We’re first call for all the SWAT team back-ups, for Ross Fairfield and Pickaway County, so we will be here closer for all those SWAT teams and those SRT teams. We just did two operations with Ross County last week.”

Gray explained, “Whenever they do an operation that they feel is going to be dangerous, pretty much everything with SRT is, they call us and put us on standby. So we go ahead, and we have designated LZs that we’ve set up with them. We’ll launch to whichever LZ they’ve designated, and we’ll be running their active until they’re done with their operation. That way if they need us we’re there ready to go, just sitting outside the safety border of their operation. We do that for all three counties as first call right now.” With the third seat, they can also take up an additional person, like an officer’s partner.

In addition to medical services, the helicopter can be used for air-based searches. Wolfe said, “We can’t do rescue, but we can do search. We can take up spotters with us. So there’s a lot of extra little things we can do that seem little right now because they’re little ticks on paper but when it comes down to being needed, it’s a big deal,” Wolfe concluded. 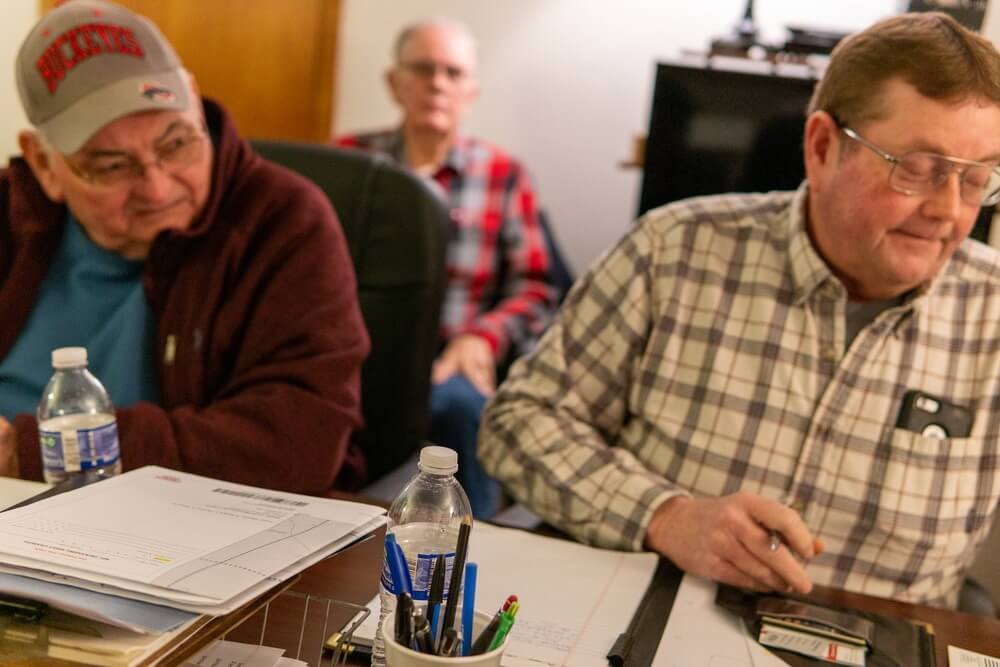 Gray said that extra seat comes in handy if they need to take a family member with the patient. She said,  “We’ve taken mom’s with us, and for the mom to be able to ride with her child to the hospital, that’s priceless. I know I’d be the mom hanging on to the skid if that were my kid. So that’s a really big deal for people.”

The Survival Flight crew was ecstatic about their new home in Pickaway County. Wolfe said, “We get on scenes and you have so many different departments that have to work together, and they do it beautifully. We really respect that.” Gray added, “We’re glad to be down here.”

Perry said that they are bringing in a newly purchased helicopter to service this location. The one in Grove City will be used elsewhere. He said that it needs to be certified for use, and they plan to be taking calls from the new location within days.